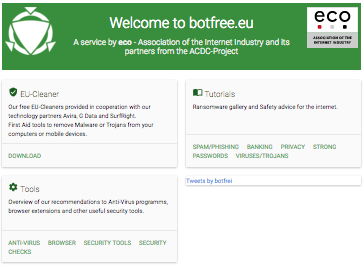 Botfree.eu previously acted as a simple landing page for the national anti-bot support centres that had been built up during the project in ten European countries and also in Mozambique.

One year after the project end, the website has now been redesigned and turned into a functional European anti-bot support centre. This service is now being operated by eco – association of the Internet Industry, with support from its partners from the ACDC-Project. eco already offers the German anti-bot support centre Botfrei.de, started in 2010, and took the role of project coordinator of ACDC.

The focus of the Botfree.eu service and an anti-bot support centre is to provide first aid to victims of Malware and Botnets, but also to give advice on how to stay protected from malware and other cyber threats like phishing or ransomware. The security vendors G DATA, SurfRight – a Sophos Company and Avira provide free EU Cleaners that allow users to scan their devices and to remove detected malware, even on Android devices.

Additional tools like the Android Device Monitor from the Slovenian company XLAB and the CONAN app from the Spanish CERT INCIBE widen the mobile portfolio.

Additionally, Botfree.eu also hosts an English version of Botfrei.de’s Ransomware Gallery. This gallery provides an overview of the various ransomware types from recent years, along with information and instructions about possible solutions for removal.

Internet users can also rely on the English section of the Botfrei.de Support Forum to get assistance with removing malware from infected devices. The latest news from the Internet security realm gets distributed through the Twitter-Account @antibotnet

1 thought on “Relaunch of Botfree.eu”