The Danish Heimdal Security provides a piece of software that takes care of updating your vulnerable Windows programs. Heimdal, like the God in the Nordic mythology, is the guardian of your PC, keeping your software up to date, thus minimizing the risk of exploits that threaten your PC.

Heimdal is here, to keep your software up to date

Unlike Secunia´s PSI, Heimdal doesn´t want to keep track of all your software, but it´s got a steadily updated list of possible vulnerable software, which can be used to exploit your Windows. Every program that´s on this list, will be periodically checked for updates and if Heimdal finds a new version, it will be installed seamlessly in the background. As it doesn´t keep track of all your software, Heimdal is very ressource friendly and it loads silently in the background at Windows startup. 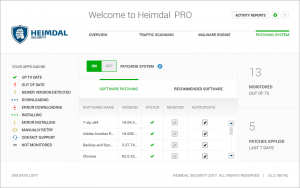 Heimdal shows a list of software, it keeps track on

Most malware is aimed to exploit flaws in 3rd party software like Java, Flash, Acrobat Reader respectively their corresponding browser plugins. Updating them is often neglected by the users, thus opening a wide open door for malware to enter your PC.  With Heimdal installed on your PC,  you will never miss a critical update – Heimdal will do this task for you and will take care about all critical software.

Everything comes for free, you don´t have to pay anything. However, if you are more concerned about your security, you can upgrade Heimdal to a “Pro” version and if you´re running a business to the “corporate version” which allows you a centralized management of all your Heimdal agents. The Pro-version adds Anti-Malware functionality to Heimdal, enables the behavioral based detection of malware and also adds a DNS based blocking of dangerous web content, preventing traffic to servers which are known to host malicious programs. 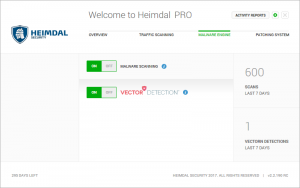 Heimdal should be used in conjunction with your preferred anti virus program. It doesn´t claim to be a full featured anti-virus product, as it has no removal routines for malware, but it can scan your PC for infostealers that are not detected by common antivirus programms. 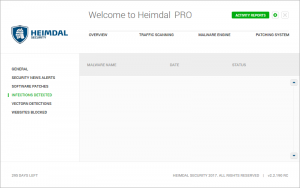 Heimdal can be used in several versions: a free test version, a pro version with advanced functionalities such as web filtering securing your online presence, and finally a corporate version which can easily be distributed and administered in a Microsoft Windows network. The differences are also explained on Heimdals Website. 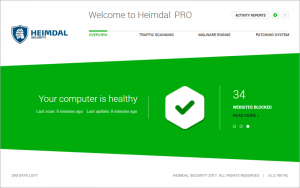 A nice program with just a small memory print, that keeps your vulnerable software up-to-date. Since i have installed it on my test machine, it works flawlessly and silent in the background and takes care about my plugins and critical updates for possibly vulnerable software, which i might miss otherwise.